After the robot rebellion, Neon City is in an irreversible state of dystopia. With the four gang leaders claiming their turf in each surrounding territory, it’s up to you to bring down them down, all the while fulfilling the many requests of robots, humans and mutants alike along the way.

From the very beginning, you collect four pins which give you new abilities. Once your VR tutorial simulation is over however, these pins are stripped from your possession, driving you to explore, fulfill requests and defeat mini-bosses to retrieve them one-by-one.

The game’s quest system seems to be similar to that of The Legend of Zelda: Link’s Awakening‘s where you interact with NPCs, gain key items and use them to give to others. It’s documented much better in Neon City Riders however, with a log system in the menu that helps you to keep track, although I would still recommend taking screenshots whenever someone says something of note that you may need to remember later on. The Nintendo Switch console is great for that with its capture button and easily accessible album. However after a while of wandering around aimlessly trying to work out what to do next, it certainly gets old quick. You can pay 50 credits to buy a clue on your map, but they weren’t particularly helpful either.

Enjoying our Neon City Riders Switch review so far? Don’t forget to like us on Facebook and follow us on Twitter for more Nintendo Switch content. Also, please consider supporting us on Patreon so that we can continue to do what we love doing.

The game is smooth and the combat is tough but fair. Most of the difficulty comes with the environmental hazards such as spikes and electrical currents. Every time you enter a new frame, the game will autosave. This is a nice feature as you will find that you will die a lot, however you won’t keep the coins that you’ve picked up along the way, adding to the challenge. Whilst this seems fair on the surface, it is surprisingly easy to die, especially when this can happen if you walk into any water, whether it be the ocean or simply an oddly deep puddle; years of game design had me to believe that my character just simply won’t walk into the water… my world has been turned upside down!

Once you finish the tutorial and are placed in Neon City (the centre of the game world), the map appears simultaneously open and closed off. What I mean by this is that you can access quite a lot of the map from the get-go, but there will either be something in your way or you’ll be in a section that is technically doable, but would be wiser for you to have obtained a pin prior to attempting it. The game often suggests revisiting sections if you feel like you’ve exhausted all of your options, but this just had me jumping round and round to the point of insanity. This method of open linearity is a double-edged sword as one can appreciate the freedom and the level of thought, requiring you to grow accustomed to the world and its inhabitants, but it can also result in confusion and frustration, jumping around between areas aimlessly and without hope. You do have the ability to go to a telephone and buy leads, but they’re not cheap nor, as previously mentioned, not always as helpful as you’d be wanting them to be.

With all that being said, the ability to fast travel on a whim once you’ve unlocked a fast travel point is a godsend in a game with as much backtracking as this. Neon City Riders could’ve been a real deal-breaker without it.

Neon City Riders has had great lore and world-building that makes you want to engage with each and every NPC you come across. The world and its aesthetic provides a lot of depth to the world and its inhabitants, making each corner something new to delve deeper into.

The dialogue is often witty and humorous, with many one-liners that had me chuckling each and every time. However, a lot of these lines were let down by frequent spelling and grammatical errors that had me truly question who was in charge of the editing.

If you’ve seen the trailer or observed the screenshots, you’ll immediately be enamoured with the game’s Neo-dystopian futuristic aesthetic with a grunge 90s art style. Whether this is correct or not, I’m personally sensing inspiration from the early 90s The Simpsons, reminding me of something you would’ve seen in the beloved arcade brawler.

The soundtrack is very catchy but even more repetitive. The game’s design will often have you simply trying to explore and interact as much as possible and when that grows tiresome and you are constantly met with the same eight bars over and over again, the frustration will build.

Neon City Riders provides a world filled with rich lore and intrigue round every corner, but it misses the mark on so many other aspects that will build nothing but frustration and headaches. It’s a double-edged sword in so many ways and at the end of the day, I can chalk it up to being a really fun time that I will never want to revisit. On a final note, I must praise the bravery to implement new world design elements that really could have been detrimental to its overall success if done incorrectly.

Thank you for checking out our Neon City Riders Switch review, thank you Bromio for providing us the review code and thank you to our $5 and up Patreon Backer for their ongoing support: 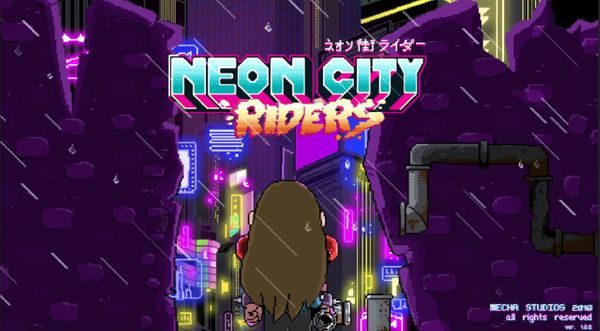 After the robot rebellion, Neon City is in an irreversible state of dystopia. With the four gang leaders claiming their turf in each surrounding territory, it’s up to