At PAX Aus 2019, we were fortunate enough to be able to speak with developer Clinton from Caustic Reality (published by Blowfish Studios) about their upcoming game – Infliction.

Alex: Hello everyone, it’s Alex from Switchaboo here and I’m joined by Clinton who is the lead developer on Infliction. How are you today, Clinton?

A: Can you tell us about Infliction?

C: It’s a story-driven horror game. Basically, it starts out with a tragedy, and you have to go back in time ten years, so it uncovers the story over different time periods. All the while, you’ve got horrible AI hunting you down. It’s kind of inspired by Gone Home, and a series of horror movies, so if you think like that, that’s the sort of gameplay you can expect.

A: So how does that AI work exactly? Can you hear things in the background creeping up on you and whatnot?

C: Yeah, after a certain amount of time that you’re exploring a particular area, all the clocks in that area will stop when she spawns in. She makes noises, so you can kind of approximate where she is, but once she spots you it’s usually too late. You do have a couple of options of fighting her off, but it really is prolonging the inevitable in most cases.

A: Yeah, very creepy, I can imagine.

A: A few jump scares as well?

C: Yeah, a few jump scares, particularly if you don’t see her coming. So if you’ve got your back to her, that’s usually an issue. [Laughs]

A: [Laughs] We did a bit of research into it, so, the story is based in truth, you said, can you go a little bit more into that?

C: Not necessarily based on a true story or anything like that, but it’s based more on real-life tragedy, so I suppose when I was trying to come up with the story for Infliction, and the main things that inspired me was I just became a new father–

C: Oh, thank you, that was three years ago now.

A: Congratulations for then!

C: I suppose at the time I was thinking, ‘What’s the most horrible thing that I can imagine happening to me right now?’ and then the story sort of lends into that, so I took my characters, did the most horrible thing that I could imagine to them, and yeah, it’s definitely not wish-fulfilment. Quite the opposite. So, based on tragedy that could happen, and then applying a supernatural slant on top of that.

A: And did you take any other inspiration from any other video games?

C: No, not really. I’m not really a huge horror gamer necessarily, so most of the inspiration for the game was drawn from horror movies, I’m just a fan of the genre overall. As I said, a lot of the gameplay inspirations come from Gone Home, and that game sort of inspired me to get into development in the first place, so that always stuck all the way through, so, heavily into environmental storytelling.

A: Very nice. Is Infliction your first game?

A: So how is it going into Infliction completely from scratch?

C: I guess I started out in the first year and a half part time, and as I said, I was a father and I was studying game development at the same time, and I was working full time, so yeah, very busy. Then I got made redundant from my job, which made me do a backflip in excitement because it meant I could work full time on the game.

A: Bit of a blessing in disguise there.

C: It was. So yeah, three years later, after I’d started, it was more or less finished and launched on Steam.

A: That’s really cool. So this one’s developed in Unreal Engine, is that right?

A: So what was the decision behind that?

C: I’d actually started developing it in Unity, and I ran into a couple of problems in Unity, but they’re all just tools in a toolset, right? So the engine doesn’t necessarily hold a huge sway over anything I’m doing, but I’d started studying art, and my art teacher was all about Unreal Engine, kept going on and on about it, so I jumped in there to check it out, and Unreal’s just a really pretty engine, as an artist/designer, it’s a very artist/designer-centric engine as well. So my decision-making was purely based on jumping in there and checking it out, it feeling right and being a good fit for me. Unity’s still awesome as well. Yeah, I dunno, it just felt comfortable.

A: And how is the process of porting it over to Switch going?

C: It’s going well, it works on the Switch. It needs some optimisation at this point still, but yeah, we’ve definitely been working on it. I’ve been developing it on my own, but Blowfish Studios have come on as publisher, so I’ve got some help in porting it as well, which is fantastic.

A: Yeah, that’s always fantastic. So going back to the game, the house is said to get increasingly twisted as you progress, can you tell us a little bit more about that?

C: Yes, [laughs]. ‘Increasingly twisted as you progress’, it sure does. It starts out getting pretty twisted as well. Something pretty bad happens at the start. Just to give you an example, at the start you’re driving home, you go past a car accident, you pull into your house, you go through your house, and you find out some tragedy has happened. You escape the house pretty quickly, and then you crash your car. The accident you go past at the start is actually your own accident. So it’s sort of twisted in that way. It’s like, it’s surreal and it’s pretty difficult to trust your environment, because I sort of twist things up as you go through. So that’s just an example of something that happens in the very first part of the game, and from there you’re really reliving a lot of memories and things like that. So you can get sucked through objects into other environments, and that’s all I’ll say about that.

A: [Laughs] Fair enough. Let everyone experience it for themselves.

A: With the Switch version, have you thought about how HD Rumble can work with it?

C: Yeah, so I’m thinking something along the lines of, I already have an inbuilt fear system, so that fear system sort of records what’s happening to you as a player and increases or decreases depending on what’s going on. Rumble will definitely be built into that in terms of heartbeats and having your neck cracked–

C: So I’ll definitely be getting Rumble into those sorts of things. Lovely pleasant things, lovely narratives I like to weave…

A: Fantastic. So everything in the game, sound design, graphics and art, that’s all done by you, is that correct?

A: That’s really impressive, especially for a 3D game.

C: Yeah, I had little tiny bits of help — I hired an animator to polish a couple of my animations at the end, I had a buddy of mine help with one cut-scene, but yeah, 99.9% of the game made by me.

A: When can we expect to play Infliction on Nintendo Switch?

C: Hopefully soon, I don’t have an exact date yet. I’m hoping some time in the next three to six months, not exactly sure.

A: Is there anything else you’d like to say to our readers?

C: Buy Infliction, and play it, and you’ll have a really good time. I don’t think there’s a lot of horror games on the Switch yet, so hopefully for the horror fans out there, this will scratch that itch.

A: And where can readers go to find out a bit more about the progress of the game?

C: You can go to blowfishstudios.com, or you can go to causticreality.com, which is my own studio, and I’ve got a blog up there as well, so you can check that out. I haven’t updated it in a little while, but I will very soon.

A: Awesome, thank you so much for that, Clinton, I appreciate you taking the time out.

Thank you for checking out our Infliction Interview and thank you to our $5 and up Patreon Backer for their ongoing support:

Not long ago, Dr Kawashima’s Brain Training was confirmed to release in Japan on January 3rd 2020 and now, the brain-teasing puzzle game has been confirmed by Nintendo 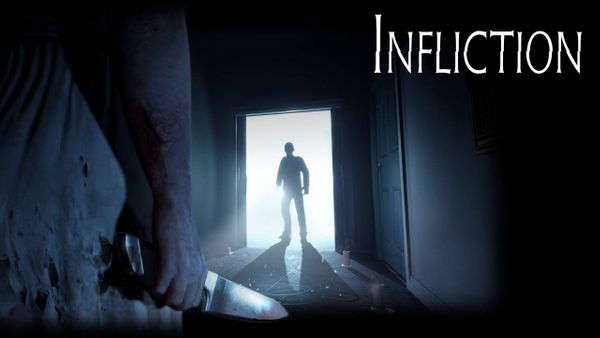 At PAX Aus 2019, we were fortunate enough to be able to speak with developer Clinton from Caustic Reality (published by Blowfish Studios) about their upcoming game – Infliction. Alex: Hello