If you’ve ever played a “Warriors” game, you know that weapons are the most important tool linking you to the on-screen carnage. While that tradition continues boldly in Koei-Tecmo’s Nintendo Switch exclusive, weapons handle quite a bit differently than in previous entries. In this article we’ll be covering their basic properties and interactions with one another so that you can become an expert on how weapons work on the battlefield.

Much like in a traditional “Fire Emblem” game, combat between characters in “Warriors” takes place within the weapon triangle system where lances beat swords, swords beat axes, and axes beat lances. Fight at an advantage, and attacks will rapidly trigger a yellow stun gauge on the enemy you’re attacking, which you can quickly deplete to unleash a devastating attack on surrounding enemies. Fighting at a disadvantage though, means your characters will take more damage, take longer to kill the enemy, and have access to a more sturdy, greyish-blue stun gauge far less often. This means that unlike in “Hyrule Warriors” where weapon effectiveness was determined primarily through elemental typing and played a more minor role, fighting at a disadvantage in “Fire Emblem Warriors” can end up getting your characters killed. Before each battle then, take a quick look at the deployment screen to assess the different weapon types available to you, and switch them on the fly to maximize the damage you deal.

Complicating the match-ups are weapon specific abilities. These are listed underneath the name and damage of the weapon, and give different attributes such as increasing the damage of your strong attacks, or increasing the effectiveness of your healing skills. However, things you want to be keeping an eye on in the beginning of your journey are the special “slayer” abilities that appear from time to time, which work by dramatically increasing the damage dealt to specific unit types. For example, “armorslayer” on a sword will chew right through knights, whereas “lanceslayer” will be incredibly effective against all enemies wielding that specific weapon type. While it may sound tempting to load up your weapons with these abilities, they come at a cost. Each weapon bearing one takes a damage penalty against all other units and weapons. Choosing to add these abilities requires making a trade-off between all-around effectiveness, and more niche roles.

Notice how the “slayer” attribute reduces the damage dealt by the weapon (number shown in red).

Certain character class specific weapons are also inherently more effective against certain unit types than others. The prime example here are the bows that archers wield against Pegasus or Malig knights, which simply tear through their enemies in just a few hits. These interactions are denoted on your map screen with red or white “!” symbols. White indicates that your unit has the advantage, while red indicates a disadvantage. Keep a careful eye on your flying units in these situations and switch to them liberally to steer them out of trouble, because the AI can, and will, fly themselves right into the line of fire on more than one occasion.

Keep an eye out for those exclamation marks when looking at the map deployment screen, or your fliers will suffer.

Given the huge diversity in weapons, finding (and crafting, but more on that later) weapons becomes an area of critical concern to maximize the effectiveness of your army. While the conclusion of each mission scenario grants you generic weapons at the spoils screen, certain units within each map have their own exclusive weapons that you can acquire by defeating them. Much like in a traditional “Fire Emblem” game, these weapons will be listed under the unit properties in green. If you’ve bested them, you’ll acquire the weapon upon completion of the scenario, but if you fulfill the mission requirements before you can defeat these units, the weapons are lost and can’t be acquired unless you replay the scenario a second time. Make sure you note targets of interest at the beginning of each fight to make sure you don’t miss anything that could prove to be useful later down the line.

“Fire Emblem Warriors” implements the interesting option to craft weapons in between scenarios through the Smithy, but the process to do so isn’t explained all that well. Essentially, this crafting mechanic allows you to take weapons that you’ve acquired and imbue them with abilities of your choice to create unique character load outs. To do so requires two things: first, you need weapons with open ability slots, and second, you need to already have a weapon with the ability you want imbued. You need to select the weapon you want to modify, and then select the weapon whose ability to want, which destroys it in the process. This means that adding abilities is a long process that requires a ton of base materials to create the powerful weapon that will carry you the different scenarios and boss battles, but is a valuable tool to keep your AI controlled partners contributing and alive.

Weapon attributes are listed in the rectangles under the name of the item. In this case, this sword will multiple the gold you get after battle two times, one for each ability. Also be sure to note the weapon rank “E” to get a sense of how powerful it is.

On top of abilities, damage, and type, weapons also have a rank assigned to each of them that denote their power. As you first acquire them, characters are equipped by default with either signature weapons (such as Chrom’s Falchion) or generic ones that start at “E” rank, and can potentially progress all the way up to “S” rank. For the most part (With certain exceptions to be covered in a more advanced tutorial), weapons improve in damage and performance in a linear fashion, with “D” class weapons being stronger than “E” class weapons, and “C” weapons being stronger than both, etc. As you acquire them, it’s always a good idea to be optimizing your characters by equipping the strongest base weapons available to them at the time, but doing so requires upgrading your characters with Boost Crests.

Boost Crests are linear upgrade trees that improve specific character performance in different ways. For example, upgrading Rowan’s heavy attack combo chain will add attacks to it with each click of the button, but only for him. That same upgrade must then be applied to all other characters individually. However, Boost Crests also allow you to unlock weapon classes for your characters. So, to allow Frederick to use “C” class weapons, you must unlock that node in the Boost Crest tree first.

In this case, Rowan is only able to use weapons rank “C” or lower. The use of “B” rank weapons is locked behind this boost crest, which requires the materials listed on the right-hand side.

Ultimately, Fire Emblem Warriors is more complex than prior games, requiring strategy and an understanding of the different mechanics to achieve success on the battlefield. With this guide, you’re well on your way to gearing up your party and clearing those tricky scenarios, but stay tuned! Next time, we’ll be looking at more advanced weapon mechanics for those players that want to take their game, and characters, to the next level.

Credit: Konami Earlier today Konami announced that their “sports simulation” compilation “Hyper Sports R” will be launching exclusively for the Nintendo Switch. The Japanese publisher has been quiet recently, but after the success of “Super Bomberman R” last year has been open to the 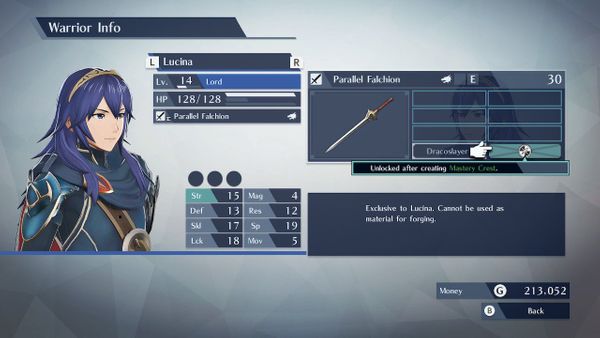 If you’ve ever played a “Warriors” game, you know that weapons are the most important tool linking you to the on-screen carnage. While that tradition continues boldly in Koei-Tecmo’