Golem Gates is a sci-fi card-based RTS battle arena style game that pits you against enemies conjured from a whole other plane of existence. Protect your Harbinger that stands guard and defeat your opponent’s by using a wide range of cards known as Glyphs to bolster your offensive force.

Golem Gates contains a wide variety of strategic approaches. You can choose from 100 different Glyphs, but having an energy system that slowly fills up over time allows for much emphasis on the decisions that you make.

Each Chapter has a Main Objective and a Bonus Objective that allows you to gain further rewards if successful. These Bonus Objectives are a great way to organically increase the difficulty at the player’s discretion, providing additional challenges if the player wishes to undertake them.

The Switch port of Golem Gates could have easily been a lazy port, however attention to detail allowed for the use of the touch screen, which is very important for a console RTS game. However, the game cannot be entirely played using the touch screen which can feel awkward to hold when navigating the controls and screen simultaneously.

During crucial and intense moments where there are a lot of enemies on screen at one time, the frame rate dips horrendously. It makes those key dramatic moments less impactful and just a mess of units diving on each other.

When it comes to the difficult in Golem Gates, it seems to be in an internal battle with itself. There are sharp difficulty spikes that made early missions seem utterly impossible and when I tried it again, I won in landslide victories.

A little bit of HD Rumble could have gone a long way in Golem Gates. Not necessarily in order to recreate the feeling of battle, but more so a little vibration here or there to indicate situations on the battlefield. Sometimes I wasn’t sure when I was being attacked, so a little rumble to draw my attention to that could have been really useful.

Golem Gates comes complete with online, co-op matches and trial modes that will have you enthralled for hours. It’s fantastic to see that the Nintendo Switch version of Golem Gates has not been dumbed down in any way and is absolutely a full version of the game.

Each chapter has a different map layout that presents a wide variety of challenges. The missions can vary, from simply needing to defeat the enemies Harbinger to taking control of four strategically-placed generators in order to cross a bridge.

Whilst the maps can vary, the areas still seem to be slightly two dimensional. What I mean by that is you always know what to roughly expect and I never felt wowed by anything when it came to the game’s different terrains.

The story progression is done in a clever minimalistic fashion. At the beginning of each Chapter, before the action begins, you as the Harbinger stand in front of a giant sun that appears to be an omnipresent being. This being relays missions and the progress of the invasions back to you without straying further from that. This narrative technique works in the game’s favour as you may or may not choose to believe what it is that it’s saying. In addition to this, you often get radio transmissions from enemies that further adds to the lore of the game.

Sometimes I look at Golem Gates and I am impressed with what I see, whilst other times it just comes across as dull and without personality. It all just feels like it has been done so many times before, but it does need to be said that the mood is certainly captured for the story and gameplay that it presents.

The graphical fidelity takes a dramatic hit when playing in handheld mode, which is a shame when the optimal way to play the game is undocked. The fuzziness that comes from this makes it difficult to differentiate between the different troops at your disposal and makes it all appear to be one big blur of units.

The soundtrack isn’t as clearcut as you would initially expect it to be. Rather, it takes on a much more ambient tone, with emphasis on the bass. It works quite well to set the overall tone of the game, matching its dark and rustic atmosphere.

The narration and voice commands are throaty and deep. When you’re under attack in a different location, the voice casts a sinister tone, however it can sometimes go unnoticed as it doesn’t stand out as much as you would like it to.

Golem Gates succeeds in what it sets out to do, but doesn’t seem to go far beyond that. The stage is set, the music is tense and the controller is in-hand and ready, but the awkwardness of some of its controls, the sharp difficulty spikes and generic presentation keeps it from soaring to that next level. 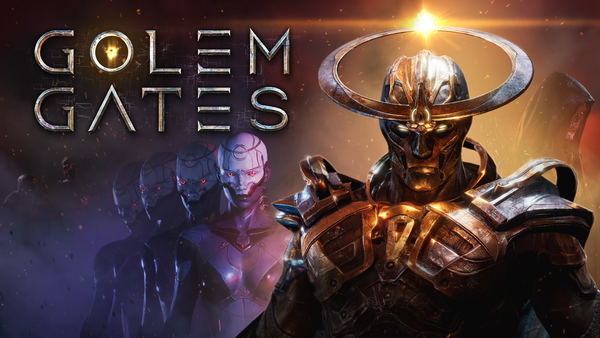 Golem Gates is a sci-fi card-based RTS battle arena style game that pits you against enemies conjured from a whole other plane of existence. Protect your Harbinger that stands guard