In all its cheeky goodness, Brief Battles has you and up to three friends obtaining special underpants abilities in order to take each other out in an arena-style brawler. With its wacky concept and charming characters, let’s provide a brief overview, shall we?

Brief Battles, in all its hilarity, is a very competent party fighting game. The controls are smooth and precise, with chaotic platforming to boot. The main crux of the game is in the multiplayer, whether that be competitive or cooperate and once you get some friends in on the madness, it’s a difficult game to put down.

The multiplayer Battle segment consists of four modes: Classic Battle, Knockout, Hold the Gold and Underpants Collector. Classic Battle and Knockout are standard modes, utilising the basics in all-out death-matches. These modes are fun with two players, but the magic is playing with as many players as possible, laughing at the game’s nonsensical hilarity.

Hold the Gold and Underpants Collector takes the multiplayer to further heights, putting emphasis on strategy over combat:

In Hold the Gold, every player starts off in the nude and your goal is to retrieve the Golden Underpants before your opponents and hold onto them before the timer runs out. This mode essentially shifts the players’ focusses from going all out to ganging up on a single-player, creating tense high-stake moments.

Underpants Collector is all about collecting as many underpants as possible and in the final seconds, take them to the portal. Don’t be too greedy though as if an opponent takes you out, you’ll lose all of your collected underpants and they’ll be up for grabs. While this mode may not be as intense as Hold the Gold, it certainly adds a fantastic risk/reward factor that is prominently felt throughout every round.

As Brief Battles is primarily a party game, the single-player unfortunately tends to lack depth. Under the game’s Challenge menu, you can learn the game’s basics in the form of a tutorial. From here, there are four modes: Underpants Collector, Tighty Whitey Targets, Butt-em-up Battles and Endless Butt-em-up. These modes, while they act as serviceable single-player content, don’t go further from that:

Underpants Collector and Tighty Whitey Targets act as simple collectathon mini-games that feel hollow in the grand scheme of it all.

Butt-em-up Battles has more depth as it features AI enemies for you and a friend to defeat, however there are only a total of ten levels across two acts.

The final mode, Endless Butt-em-up, is as the name suggests – an endless mode that artificially lengthens the single-player experience.

The core of the gameplay is fun, but the single-player aspect certainly misses the mark on creativity. This becomes increasingly apparent by its omission of online multiplayer, meaning that if you want to play Brief Battles by your lonesome, it’s nothing but target practice, underpants collecting and a few sluggish AI enemies to take out.

Enjoying our Brief Battles Switch review so far? Don’t forget to like us on Facebook and follow us on Twitter for more Nintendo Switch content. Also, please consider supporting us on Patreon so that we can continue to do what we love doing.

On a more positive note, the rumble is well utilised, making the gameplay feel dynamic and impactful. Pant Pounding (the game’s term for ground pounding) feels especially dynamic as you feel your controller shake with the same force through your palms.

Each level is incredibly well designed with strategically placed platforms, spikes, portals and more. Half of the gameplay is based around each player’s ability to utilise all that each arena has to offer. The combat isn’t as technical as your Super Smash Bros. or Street Fighter games, so the game wouldn’t be able to enact the same ‘No Items, Final Destination’ competitive spirit, but Brief Battles doesn’t aim to. Its wacky party structure is only heightened by its arena variety.

While Brief Battles lacks any kind of plot and progression, the game shines with personality. Each character is unique and funny, with an unlockable skin for each Underwearrior (such a great name for them).

My favourite character had to be Kevin, with his stumpy stature and simplistic design (wearing nothing but tighty whities, a cape and a superhero eye mask). This was until I unlocked Violet’s alternate skin and it was Yooka-Laylee! Now I leave it up to everyone else to choose a character so that I choose the other (unless they choose both, in which case I just cry).

With its unique setting and charming characters (Kevin included), I couldn’t help but feel that so much potential is going underutilised. A campaign mode with dialogue to flesh out each character’s personality would have been the cherry on top of this delightfully multi-coloured cake.

Whilst collecting new underpants abilities, I couldn’t help but stop and consider how impressive Brief Battles looks for a debut arena fighting game from a small Australian-based indie studio. The clean graphics that easily allows you to distinguish objects and enemies and the background elements are crisp and captivating.

On top of this, each character’s design is charming, providing each with their own sense of personalities and not just simply being various skins. In addition to this, you can unlock various skins as mentioned above, which having Yooka-Laylee as an unlockable option still simply blows my mind!

The music is surprisingly impactful and dramatic, adding to the game’s satirical nature. When booting up the game and landing on the main menu, you are greeted with a daunting tribal war drum beat that takes the mickey out of Brief Battles‘ silly premise.

Juicy Cupcake’s debut title Brief Battles is a satirical gold mine that brings a lot of wit and charm to the party arena-based fighting genre. While Its lack of online multiplayer and depth to its single-player may result in the game only being loaded up during parties, the game fits right at home on the Nintendo Switch with two-player multiplayer built right into the system. Oh, and All Hail Kevin!

*The first major update for Brief Battles was initially scheduled to release on the game’s Switch launch, however it has been delayed (TBC) with no details revealed as of yet. We’ll be sure to update our review, and therefore its Final Score, when this update releases.

Thank you for checking out our Brief Battles Switch review, thank you Juicy Cupcake for providing us with the review code and thank you to our $5 and up Patreon Backers for their ongoing support: 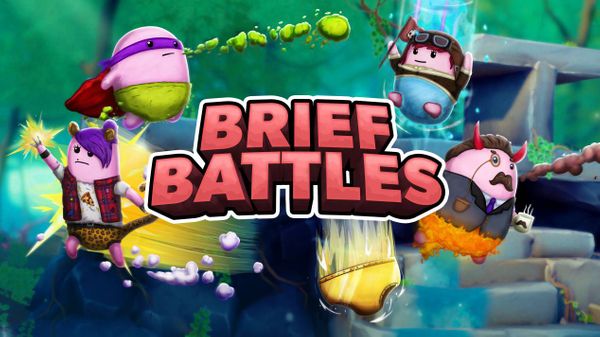 In all its cheeky goodness, Brief Battles has you and up to three friends obtaining special underpants abilities in order to take each other out in an arena-style brawler. With