Blasphemous is a tough game, so it’s not surprising that the boss battles are tough too. Our Lady of the Charred Visage is one of the earlier boss fights, but that doesn’t mean it’s easy. Let’s get into it…

For this fight, be sure to equip any lightning or fire defence-boosting items as they will definitely help.

First thing to note that is that you can start attacking even before the health of the Charred Visage comes up, so be sure to get in an early shot. The piece of brain that is showing is going to be our target throughout this entire fight.

The hand is the one to watch out for when it comes to attacks, so be mindful of that. It’ll shoot laser beams at you, but you’ll get a second indicator before it first, so dodge out of the way straight away. At the start of the battle, the laser won’t move.

The hand will also send out a lightning windmill attack. The best way to dodge this is to run to the far side of the area, making the gaps bigger and when you can, dodge between them as shown below.

The hand of the Charred Visage will also send out ORANGE balls towards at a slow yet direct pace. The best way to avoid being hit by one of these is to move slowly but surely to the side and when you need to, use your sword to climb up one of the walls (the hand may also shoot a laser at you once it’s done, so be mindful of that).

The hand will also make another windmill, but this time of lasers. You’ll get the second warning for this one as well. So for here, be sure to move inline with it (don’t try to be a hero), and even move underneath the hand.

Once halfway through the fight, another hand will appear. The second hand won’t introduce new attacks, but it just means that there’s now twice as much to avoid. Blasphemous is a tough game, so it’s not surprising that the boss battles are tough too. Tres Angustias is one of the earlier boss fights, but that doesn& 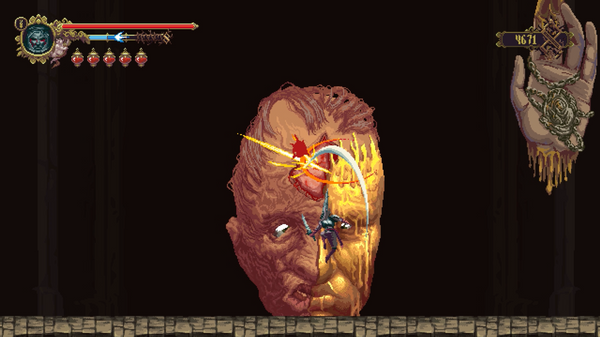 Blasphemous is a tough game, so it’s not surprising that the boss battles are tough too. Our Lady of the Charred Visage is one of the earlier boss