Bite the Bullet is aptly named, as your enemies will do just that and then some. In this run and gun platformer, you will mow down enemies before you chow down…on enemies. Bite the Bullet is a love letter to 90s gaming with a dash of adult humour that is something special.

Bite the Bullet is an action packed platformer that has massive stages, fast paced combat and scores of enemies to eviscerate. The gameplay consists mainly of getting from point A to point B while leaving a trail of bodies in your wake and eating anything in sight.

You can eat enemies after dealing a certain amount of damage as well as vegetables and meat that spawn after killing enemies. Eating allows the player to collect fat, calories and protein that are used to upgrade your weapons. The RPG elements continue as you level up and gain new abilities and stat buffs.

Enjoying our Bite the Bullet Switch review so far? Don’t forget to like us on Facebook and follow us on Twitter for more Nintendo Switch content. Also, please consider supporting us on Patreon so that we can continue to do what we love doing.

The sense of progression is great but by the end of the game, your character will be drastically overpowered. There is a weird thing where both A and B are confirm buttons at different times that gets a little confusing but overall, the gameplay is great.

The best way I can describe Bite the Bullet in terms of level design is Sonic the Hedgehog meets Metal Slug. The stages are sprawling masses of platforms and enemies that remind me of the Genesis/Mega Drive era of Sonic games. The stages are nonlinear, layered and chock full of a wide variety of enemies. This all sounds well and good but with only 8 stages, the developers tried to compensate by making each stage really really long. Painfully long. This type of stage really works against the casual run and gun motif, since it requires you to play on the same level for long periods of time. Imagine going through an entire early Sonic level at a walking pace and you’ll have a good idea of how long these stages feel. Luckily the boss battles are worth the wait.

The story is surprisingly fresh: your character has to kill monsters to add to a compendium (think Pokedex) by an anonymous corporation. More is revealed about their dealings as you progress, which makes for some great capitalist allegory. The writing is also very funny; character interactions are not to be overlooked.

Bite the Bullet has some impressive graphics. The sprites and environments are varied and vibrant. The 16 bit inspired graphics invoke more 90s nostalgia and pairs well with the music. In addition to the saturated colors, the lighting effects create immersive visuals that change between and even within stages. There is significant lag in later stages, but hopefully there is a post-launch patch to alleviate these performance issues.

The music that accompanies Bite the Bullet’s fast paced violent gameplay is rather fitting: fast paced metal. It definitely compliments the gameplay and overall aesthetics, while doing something most games like this fail at: the music doesn’t get lost behind the chaotic gunplay. In fact, it almost seems like the gunfire is part of the music.

Bite the Bullet is a game that is great in a lot of areas but the faults can glare over the good parts. The gameplay is fun and fast, but the overly long stages make the experience feel like it’s dragging on. The lag also makes the later stages unnecessarily hard as you’re fighting the frame rate just as much as your enemies. Overall the game is a pleasant experience but just needs a little more polish to be perfect. It certainly scratches that elusive Metal Slug itch.

Thank you for checking out our Bite the Bullet Switch review, thank you to Graffiti Games for providing the review code and thank you to our $5 and up Patreon Backers for their ongoing support: 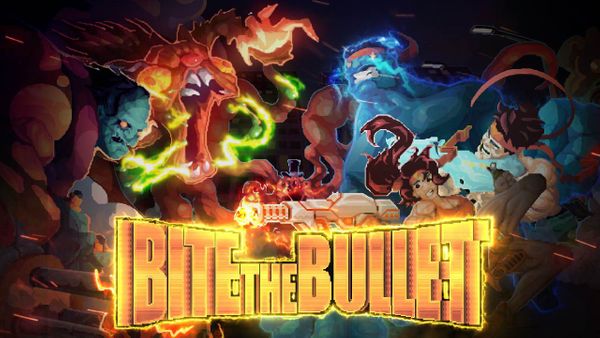